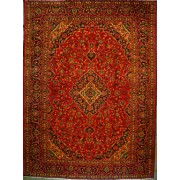 A Kashan rug (Persian: قالی کاشان‎) is a type of Persian rug from the area of Kashan. Kashan is a city in Isfahan Province in North Central Iran. There was production of Persian carpet at Royal workshops in the 17th and early 18th century. The Persian carpet workshops ceased production in about 1722 after the Afghan invasion.

Persian carpet production was very minor until the 20th century. Historically, Kashan was a major center in the garment trade. In the late 19th century, the market shifted and the local industry went from fine wool cloth to fine wool carpets. High quality wool was sourced from Sabzevar.

Today, some of the best Kashans are from Ardistan and excellent ones are also produced in Yazd and Kashmar in Khorasan.

Add to Cart
Add to Wish List
Compare this Product