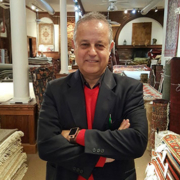 The President and Owner of Jacobsen Rugs is Faramaz (“Frank”)Asef. Frank has more than 25 years experience in the rug business. He hastraveled widely in the US and abroad and has business contacts in every rugmarketplace. Frank’s goals are to modernize and expand Jacobsen’s businesswhile preserving the best of our long history. It’s an exciting time to beinvolved with handwoven rugs, and Frank’s enthusiasm and business expertiseguarantee Jacobsen’s future success. 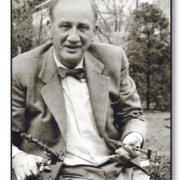 We were founded by Charles W. (“Jake”) Jacobsen. Jake was a man of amazing interests and abilities. In his 92 years he made indelible marks as good citizen, soldier, businessman, and author. Born in Tennille, GA, Jake attended the University of Georgia, graduating in 1915. When WW I came, he enlisted in the Army and served as Captain in the artillery in France. Years later, he would see combat again in WW II as a Colonel in the Infantry. He landed at Anzio and suffered through the bitter campaign for Italy, and was one of the first American officers to enter liberated Rome.

Between the Wars Jake was a civilian, and in need of a job. A superior in the military had introduced him to the mysteries and pleasures of these strange but alluring rugs from the Middle East, and in 1924 Jake opened a rug business in downtown Syracuse, NY.

Jake’s first buying trip abroad was to Turkey in 1932. In the decades to come there would be many more trips to the wholesale markets in England and Germany, and to Turkey, Iran, India, Pakistan, Afghanistan, and the Balkans. His early trips set the model for our buying trips today: we go to the countries and villages where rugs are actually made so that we can buy the best available pieces at the lowest prices.
Today we’re still an old-fashioned, employee-owned company with a simple business philosophy. Our only interest is in buying and selling genuine, handwoven Oriental rugs. We strive to listen to our customers’ needs, to extend truly personal service, and to provide the best value we possibly can in the rugs we sell. We’re proud of our past, and of our reputation as “America’s source for Oriental rugs.”