There exists a very widespread belief that "vegetable" or "natural" dyes are superior to "synthetic" dyes, and that a rug woven with "vegetable" dyes is in all ways a better carpet than a rug woven with synthetic colors. In fact, it is usually not possible to separate the dyestuffs used in many rugs into these two neat categories, and even were this possible, some "vegetable" dyes are much more fugitive in color or even damaging to the wool than the "synthetic" dyestuff that yields the equivalent shade.

In general, "vegetable dyes" are taken to be an indication of a more traditional, more rural, more country rug weaving, while synthetic dyes are considered more characteristic of city or commercial production. Even this distinction breaks down, however, when one realizes that synthetic azo dyes (an acid direct dye that yields yellow or orange-red) were introduced to many weaving areas between 1875 and 1890, and by the turn of the century were available to many rural weavers. If a village weaver could obtain a synthetic dye, he or she was very likely to use it right alongside his traditional dyestuffs. Just because a rug is 50 years old does not mean it is "vegetable" dyed. Nor does a "vegetable" dye guarantee a longer life or higher value to the carpet. The "vegetable" black we find in so many old Turkish and Balouch rugs is so corrosive that areas of black nap will be completely worn away while nap of other colors is still thick and fully piled. Had the black been a good chrome synthetic, the rug would be in much better condition.

In the past twenty years there has been a huge increase in the quantity and variety of new vegetable dyed rugs available. The trend began in western Turkey in the late 1960's, but knowledge of vegetable dyeing has now been re-introduced into Afghanistan, India, Pakistan, and Nepal.

Common vegetable dyes
The most commonly used vegetable dyes are indigo (originally obtained by extracting and fermenting indican from the leaves of the indigo plant), madder (produced by boiling the dried, chunked root of the madder plant in the dye pot), and larkspur (produced by boiling the crushed leaves, stems, and flowers of the larkspur plant). These dyes produce, respectively, dark navy blue, dark rusty-red, and muted gold. Long ago dyers realized that as more wool was dyed in a single dyepot, colors became weaker and weaker. Dyers use this notion of depleated dyes to their advantage. The first dyeing produces a deep, strong color. Subsequent dyeings in the same dyepot produce lighter, softer colors (like the three shades of indigo, madder, and yellow illustrated here):

Dyers also quickly learned to combine colors to produce different hues. There is, for instance, no "vegetable" dye material that yields green (an important color if you're interested in weaving a floral design!). First dyeing wool blue, then dyeing it again with yellow, does produce a green color. If you look closely at the green color in a vegetable-dyed rug, you will commonly see that the color is uneven, more blue-green in some areas, and more yellow-green in others. This is because of the double-dyeing technique: 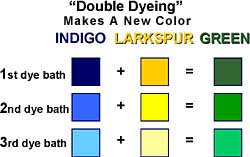 So, by using the notion that depleted dyes produce different hues, and by combining some dyes through overdyeing wool, dyers can produce a surprisingly large pallette of colors from a very limited variety of materials. These people are clever! 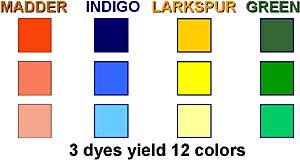