Is Your Rug Signed

Over the long history of weaving, the vast majority of handmade rugs have been made by country people who were essentially illiterate. A farmer or shepherd might be able to recognize and write a few numbers and letters, but for almost everyone in a weaving culture there was no possibility of learning to read and write fluently. To this day literacy is still a major governmental goal in most weaving countries.

Despite the difficulties, there has quite often been a desire to mark a rug in a particular way. Among village or country rugs, marking most often involves adding a date to the rug's design. It can be a real challenge to interpret a date woven in a rug!

Much less often do we find a signature in a country or village rug. This is partly because spelling is much more difficult to master than counting (there are lots more letters to remember than numbers, and there is the whole pesky problem of matching letters with all the different sounds of spoken language), but the real reason for finding so few signed village rugs is that by its very nature village or country weaving is anonymous. Too much individuality in the village is a *negative* value. Weavers make designs learned from their parents and relatives, and the village design norm is reinforced by considerable peer pressure. Make a rug too far out in design or mark it flamboyantly and everyone in the village starts to gossip behind your back.

Most all signed rugs are city rugs, rugs woven in a metropolitan area where someone can be found to write the initials or inscription even if the weaver is illiterate. Almost never is the signature the actual mark of the weaver; rather, it is almost always the mark of the entrepreneur or money man who caused the rug to be woven. Usually the inscription is in Arabic, or in Farsi (Persian) written in Arabic script. Usually the inscription is found in a cartouche centered at the end of the rug, inserted in a guard border. Often the signature represents the patronymic of a weaving family: 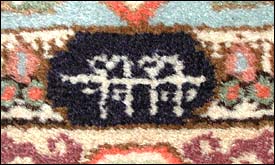 Signature of the "Tabba Tabai"
Weaving Family of Tabriz

Sometimes the signature is much more elaborate than just a logo-like combination of a few initials:

Signature in the border of a fine Isfahan from Iran
It reads: "Iran – Isfahan – Ahmad Zojaji"

Not all text appearing in a cartouche in rug is a signature; some of what looks like text is not really writing at all. There is a long history of city weavers incorporating decorative Arabic calligraphy into their rug designs. Often this script is so ornamental that it is no longer readable as text. This kind of stylized writing used as design is often called "Kufic" or "Kufesque." The rug with the Tabba Tabbai signature pictured above also has panels with "Kufic" designs: 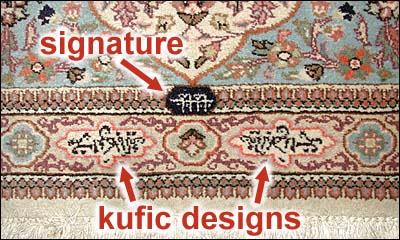 Notice that the left and righthand Kufic panels are mirror images of each other. The panels are designed to evoke a courtly and cultured Islamic tradition, but hold no cognitive content.

Sometimes there is actual, readable text in a rug's design. Most often the text is a verse from the Koran or a verse of secular poetry. This Kashan from Pakistan celebrates the good life of wine, women, and song with a picture and appropriate text: 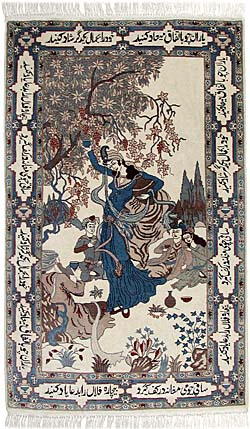 Does a Signature Add Value?

Does the presence of a sigature or inscription make a rug more valuable? Despite what the dealer is likely to tell you, probably not. A number of city rug types like Isfahan, Kashan, Nain, and Ghoum (from Iran), Hereke and Kayseri (from Turkey), and fine Bokharas and Kashans from Pakistan are signed. Finding a signature in the design of one of these rugs is sort of like noticing the little "Body by Fisher" plaque that GM used to stick on the doorsills of Buicks and Oldsmobiles: it's OK that it's there, but you wouldn't pay extra money to get it if it wasn't.
Of course, there is always that nomadic QashQai that despite all the odds has a neat, readable name and date worked into the pattern….

In any event, have a look at the borders of your rug(s) and see if you can spot a signature or inscription that you may have overlooked before!