Warps are the parallel strings stretched from loom beam to loom beam upon which rows of knots are tied. Most weavers use cotton for warp material if it is available because it is easier to weave a flat, straight rug on cotton warps than on wool warps (wool yarn is more elastic than cotton string, and is more affected by changes in humidity). Weavers who are semi-nomadic pastoralists (i.e. not farmers) are much more likely to use wool than cotton for warp and weft.

Wefts run across the width of the rug, over and under the warp strings and between rows of knots. Most often wefts are made of cotton, wool, or silk . Wefts help hold rows of knots in place and strengthen the structure of the rug.

Knots are tied by looping yarn around pairs of warps and cutting off the standing end. The ends of the "knot" become the pile or nap of the rug.

Edge bindings are made by wrapping several warps at the edge of the rug with yarn to reinforce this part of the rug.

End finishes hold knots and wefts from working off the rug's warp strings. Many rug types have a flat-woven kilim selvedge at both ends.

The field is the background of the rug inside the borders.

The medallion is the round, oval, or polygonal design element that sometimes occupies the center of the field.

Corner brackets or spandrels are designs which sometimes fill the corners of the field.

Most weavers work on fixed, vertical looms (although some semi-nomadic weavers in areas of Afghanistan, Turkey, and Iran still use the more portable horizontal ground loom). A simple vertical loom is little more than a sturdy frame, usually made of wooden timbers, designed to hold taut the warp strings upon which the weaver ties rows of knots. A heddle is used to separate alternate warps so that the shuttle carrying the weft string can be passed between warps from one side of the rug to the other. More sophisticated vertical looms have their upper and lower beams constructed as rollers. A roller loom lets the weaver roll the completed part of a rug under and to the back of the loom, allowing the construction of a longer carpet on a loom of the same vertical size. 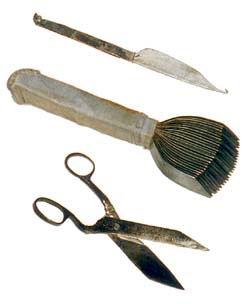 Most weavers work with a hooked knife, or gollab in one hand (top tool in photo). A weaver uses a finger to push the yarn through the warps, then uses the hook on the knife to catch the yarn behind the warps and pull it to the face of the rug. After the knot is tied the weaver cuts the yarn with a flick of the blade. After several rows of knots are tied across the width of the loom, the weaver uses a comb or beater (middle tool in photo) made of metal or wood to beat down the warps and rows of knots to consolidate the weave. After a strip of pile an inch or so wide is woven across the width of the loom, the weaver uses scissors to clip the nap back to nearly its final heigth. The scissors have handles bent so that the blades can cut flush with the face of the rug. Like the knife and comb, the scissors are made by the blacksmith down the street in the village: when they get dull, a boy runs them back for sharpening.