Runner Size for the Stairs

We consider a "runner" to be a rug in any size from about 2' x 5' to 3'+ x 20'+. Most runners measure about 2'6" wide. Runners can be as narrow as 2' or wider than 3', but as widths diverge from 2'6", the number of runners found decreases. There is a slight tendency for runner width to increase as runner length increases. It is not uncommon, for instance, to find 18' or 20' runners that measure 2'8" or 2'9" in width. Older runners (rugs from the 1920's and 30's) were often wider, often wider even than 3'. It is not unusual to find an older Hamadan or Kurdish runner that has been reduced in width by having guard borders removed from the sides to make it fit in a space in an American home. We rarely see new runners longer than 22' or (maybe) 24'.

What size runner for the stairs? 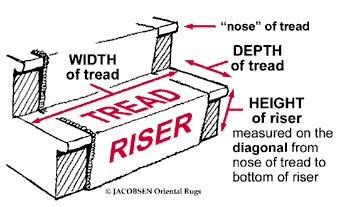 Stairs consist of treads and risers. Almost always, stairways are laid out so that risers are of equal (or very nearly equal) height. A difference of 1" in the height of a riser in the middle of a stairway is huge; you would nearly stumble on this step going up or down stairs. In contrast, a difference of 1", 2", or 3" in the depth of a tread somewhere in the stairway is almost unnoticeable. Treads can be of several different depths in the same stairway. It is not uncommon for there to be one or two wider, deeper treads at the bottom of the stairway.

Quite often a tread-and-riser combination will work out to be very close to 18" total (10" for the tread and 8" for the riser). Thus a stairway with 12 tread-and-riser combinations would need 12 combinations times 18", plus an allowance for how you will start/end the rug. 12 x 18" is 216" or 18' long. But remember that treads can vary in depth! Thus, to accurately estimate the length of runner needed to cover the stairs you need to measure 1) the depth of each tread (in case they vary) and 2) the height of the risers. Be sure to measure the risers on the diagonal from the "nose" or lip of one tread to the point below where the bottom of the riser and the next tread meet. This is because, when installed, the runner will flow from the nose of one tread to the corner formed by the riser and tread below. The runner doesn't get tucked under the nose tight to the riser.

To the rough estimate of length you've already made you need to add (or maybe subtract) some adjusting amount depending upon where you begin and/or end the runner on the stairs. You can begin/end the runner in several different ways:

Of course, other arrangements are possible… you can combine the top of Fig. 1 with the bottom of Fig. 2 or Fig. 3, etc., etc.

Usually you will measure the stairs and think about how you might want to begin and end the runner. These cogitations will give you a runner size to go looking for. Unfortunately, because Oriental rugs are all handmade and not cut-to-length, you probably won't find a runner that you really like in precisely the size you need. All is not lost! Find a runner you like that's as close as possible to the theoretical size you need. Now, adjust the installation of the rug to take up extra length if the rug is too long (as in Fig. 1), or to cover fewer risers (as in Fig. 3). It's easy!
NOTE: It is not so easy to adapt an Oriental runner to fit on circular stairs or stairways with curved sections and pie-shaped treads, and the results are rarely satisfactory. Better to install a runner on the straight section(s) of the stairs, and carpet the turns with wall-to-wall.

Medallion designs on the stairs
Customers are sometimes worried about using runners with repeated medallion designs on the stairs because almost never will the medallions fall regularly on the treads. This is a bigger problem in theory than in practice. It does not look odd to have the first medallion fall on a tread, the next between a tread and riser, and so on. You still will see and appreciate the intention of the design whether climbing or descending the stairs. Loosen up! Let go of some of those neatnik complusions!

Practical designs and colors for the stairs
Stair runners usually get heavy traffic, and once installed, it can be many years before a runner is removed for a complete cleaning. The most camouflaging design is the darkest and busiest pattern you can find. Try the penny test: close your eyes and drop a penny on the rug. If it takes a second or two to find it, the rug is perfect! It's design and color combination will hide years and years of traffic.